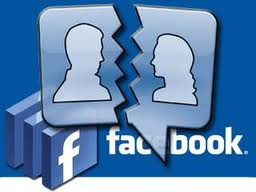 IF YOU’RE MARRIED AND YOU’RE ON FACEBOOK, YOU MUST READ THIS WORD TO WORD

As far back as 2011, American Academy of Matrimonial Lawyers conducted a survey which showed Facebook  as contributing to 66 percent divorce issues in the USA. And this has tremendously increased with alarming rate over the year. From US to Canada, Australia, India to Singapore, UK, to Africa, its all the same.

If you are presently single and you are on social media sites such as facebook, twitter, whatsapp, it can help you greatly to meet that special someone you could spend the rest of your life with.


However, let me quickly state that unethical or wrong use of these social media have also been known to even bring disaster to once very healthy marriage and relationships.

Facebook can be of great help, and fascinating to various areas of your life when used wisely and can spell real doom when used wrongly.

News and experiences are all around there today with killings, bank hackings, court cases and divorces resulting from social media.

1. Let husband and wife know each other's Facebook password:
Your marriage involves two of you as being one. The wife or husband must show transparency in terms of his/her social site usage.
Your husband should be able to log into your Facebook account and check up your interactions at any day, night or anytime. A woman who hides her phone or password access to her social sites from her husband is trying to " hide her marriage password or keys from her husband."
This brings suspicion. Likewise men should give their wives access to their Facebook account at anytime without restriction. This will also enable couples guided in what type of content they share with others in their online interactions.

Rule 2: Never go to Facebook or other social site to flirt:
As a married person, be mindful of posting flirtatious content on Facebook. Don't event try to make jokes with it. The truth is that people who are on the other side as your friends on facebook can be tempted differently and some may misconstrue your intentions.

Rule 3: Avoid spending your precious time on and for facebook.
Its often said that an idle mind is the devil's workshop. Majority of the people idle their time on facebook wandering from one profile picture, content updates to another, sometimes, ending in that of the opposite sex due to undue curiosity and thoughts which can lead to other things that can affect their marriages.

While some men have curiously tried to compare those make-up beautiful ladies pictures on Facebook, Instagram and Twitter to that of their wives and lust, resentment or dislike from expectation started, women on the other hand are having to curiously see state-of-the-art cars, lines of shirts and houses from the walls of opposite sex as measurement for their marriages. These are illusions.

Rule 4: Avoid completely or limit contact with your ex:
Like it or not, this has led to lots of misuderstanding, suspicion, infidelity and crumbling of one time happy marriages. An ex of a married woman become friends on Facebook, start sensual conversation of old days and a small conversation leads to another. Emotional influence comes in with SEXting to physical contact and then infidelity.

If you must add your ex as your friend on social media, you must define the extent and limit of your conversation.


Rule 5: Define your relationship status as " married"
There is no beating about the bush here. You are not on Facebook to look for that special person again as you are married already. Don't even attempt to leave it blank or writing it as being "complicated ". Dignify yourself and ward off those who nay want to make passing admiration on you for sex or relationship.

Rule 6: Claim and link your spouse on your Facebook.
Claiming your spouse on Facebook will tell and show the people you share all content with your spouse. This will also drive away those 'admirers' and one "night drunk" friends.

Rule 7: Don't spread your dirty linen on facebook.
Don't bring your domestic issues, quarrels with spouse or what's affecting your home or private life to Facebook. Don't bring your partner down on social media as it will trigger lots of other negative results and finally bigger crisis.


Rule 8: Kindle your marriage with Facebook.
Facebook can be a great source to privately send those reassuring romantic words to your spouse and treasure him or her of your love. You must however understand how to do this perfectly. Use private messenger to send him or her those romantic words. Tell her or him how you love him or her. Sometimes, like once in two weeks, write and express how you appreciate his/her love and care on his or her wall. This way, there is reassurance and sparks. Praise her or him and comment on his or her post or just like his or her posts.

Rule 9: Don't be stupid or hard on those "admirers, flirts".
You and your spouse is on a social site. Its not your home. Sometimes, you are going to see that " secret admirer" or "drunk guy" or "lonely", " starved" guy or  lady try to come to your spouse's wall or private messenger to write the wrong things. Be careful how you will handle this.

Don't insult or fight his or her admirers on Facebook walls as this may result in more crisis in your relationship. You and your spouse must discuss issues that comes from your online platforms and take common action.

Rule 10: Delete your account
If you are not on Facebook for life, you won't die. There are a lot of people who don't sleep well, who don't give attention to their marriages, domestic chores or even more important life matters because of addiction to social media. Facebook and social media addiction has been in the increase and causing frictions in families.
If you cannot conform to most of these rules, it is better to close or delete your account and enjoy your marriage.